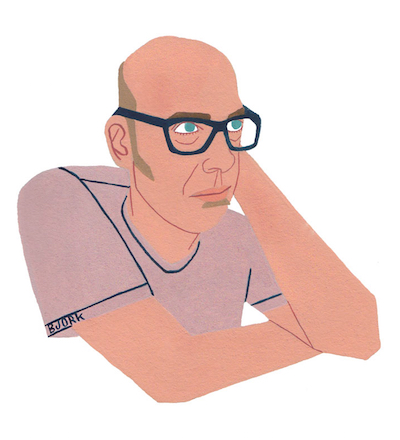 I’m meeting Dave for this interview at Vito’s, a scary and wonderful dive bar with gold-foil mirrors and meaty couches and red leather everywhere. He’s not here yet, so I sit alone on a barstool and stare at the walls. Vito’s was the scene of a murder several years ago. It’s something I’ve always wondered about. The story didn’t get a lot of news coverage, but according to rumor, the victim had gang ties. He’d recently messed with somebody and had been laying low, but his favorite band was playing, and he had to see them. It might’ve taken place on the crowded dance floor, I don’t know, but he was shot in the head. I wish I knew exactly where it happened. This question settles heavily over every surface. As I wait, it grows larger and larger, filling up the room.

Dave arrives and plops down next to me. There’s a small smile on his face. I’ve known him for a few years now. He’s an electrician in his 40s with a lean build and light, thinning hair. He sometimes wears glasses with lenses that makes his eyes appear smaller. The last time we talked, it was several months earlier, the night of the shooting at The Twilight Exit, just after all the patrons had fled the bar and gathered outside. Dave was searching for his date. He couldn’t find her, and we hadn’t seen her either, so he kept looking. But then he still couldn’t find her, and everything seemed to rev up and slow down in a certain mixed-together way. Then he found her, and she was fine.

At Vito’s, we get drinks, and Dave starts his story from the beginning. He’d showed up at the Twilight for Sunday-night karaoke. He’d been there maybe twenty minutes, Dave said, and was on his way to the men’s room. He’d just passed the alleyway-entrance door when the gun went off. “I thought it was a firecracker or something. But then I heard people screaming. I could hear Greg from outside. He said, ‘I’m dying.’ His voice was incredibly frantic.”

In seconds, nearly everyone cut through the dining area and exited. Dave stayed inside. “My motor skills slowed down. It was weird. I walked into the bathroom, then into the stall. I became a real simpleton. It felt like someone had pulled a woolen blanket over my brain. I locked the stall and sat on the toilet. I thought about pulling my feet up. I really didn’t want someone to shoot through the door and kill me. I stared at the graffiti. I thought to myself: ‘I don’t want to die in a commode.’”

Commode! He grew up with elderly parents, so he’s always dropping charmingly antiquated words like that, and “foliage," and “veranda.”

“What was the graffiti about?” I ask Dave.

“I don’t remember. Something about dicks, I guess,” he said, and we both laugh, because everything was so terrible. And because Dave made it out alive anyway. And because women’s-room graffiti is largely dick-free while the men’s is the opposite, and this idiosyncrasy has always fascinated me.

Dave continues. “I heard two more shots about a minute later. I called 911, but I hung up when they answered because I didn’t want the shooter to hear me. I have no idea how much time went by. It seemed like a long time between the last shot and the silence, but I don’t know. I was in a haze, like I was drifting in sort of a half dream.”

“I walked out of bathroom. I didn’t know where the shooter was or if there were multiple shooters. The doorway to the alley was right there. I was standing in front of it, and I walked past it. I can’t believe how poor my instincts are.”

The bar appeared empty, Dave said, except for one man, “pacing by the shuffleboard across the room. His clothes were clean, he was well-dressed, he took care of himself. He was worked up, he was distraught. He was acting like he’d been wronged, that was obvious to me. He kept saying, ‘My life is over. They took my dog.’ I didn’t know if he was talking to himself or if he was on the phone, it was dark. I’m pretty sure he saw me, but he didn’t acknowledge me. It didn’t seem like he was out to kill as many people as possible.”

“The shock was totally paralyzing,” said Dave. He moved slowly, creating more distance from the man. “I wandered into the kitchen. Things seemed really foggy and wobbly. It felt kind of like being really, really drunk. I had tunnel vision. I wanted to hide in the walk-in cooler, but I couldn’t figure out how to open the latch. A three-year-old could’ve probably done it. I kept trying to figure out that lock.”

(A week following this interview, I had the Twilight’s owner escort me to the kitchen and show me the freezer. It had an ordinary pull-handle latch. I tried it. Dave was right, it opened easily.)

“I couldn’t move the lock, so I kind of shut down,” said Dave. “I felt as weak as a newborn kitten. I turned around and sat down by an icebox and waited. I wasn’t really planning it out, but I figured the cops were gonna show up pretty soon, and then I heard the sirens. Probably right when I sat down is when I heard the sirens.”

Dave says he heard the police announce themselves twice, followed by rapid gunshots. Two cops located Dave in the kitchen, and guided him away, shielding him from seeing James’s body as they walked past, and brought Dave to the alley door. “There was a pool of blood on the step,” said Dave. “When I turned, I saw Greg lying down. I reacted to that. I became like a little girl. Something broke loose emotionally. Man, people are probably dead now. That’s the thing, I’d never seen any violence at all. It was all acoustic, so I was disassociating. It was like I was watching TV. But right there is when it dawned on me. I felt a resolve, I kind of snapped out of the fog.”

In the following weeks, Dave would turn the night’s details over and over. “I was keenly aware that my inactions could’ve caused a loss of lives. You come up with heroic images of actions you could’ve taken. Like when I heard the gun go off, and when someone started pulling the door open, I should’ve shoved it very hard, and knocked the person back.”

I interrupt Dave here, because he’s being profoundly hard on himself. I tell him that he would’ve needed the ability to see through doors as well as into the future.

He listens, but says nothing. Then Dave mentions that he thought about taking martial arts for a few days afterwards, and this reminds me of Brad, a tenant in my apartment building. Immediately following the shooting, he sent me a link to a martial-arts site. Brad was a youngish guy and really into that scene. He would often be doing t’ai chi on the back lawn, which gave him an overall dorky quality. Still, he seemed pretty nice. I’m sure he meant well, but I took his message to suggest that I’d failed to prepare myself. I was touchy about it for a long time.

At Vito’s, our bartender appears. She has silver jewelry and long straight hair, and she moves in swift bursts. Dave and I are ready to cash out, and also I need to ask. It may be impolite, I can’t tell, so I try to put some curlicues into my words while I’m enunciating them. “Say, what’s the deal with that guy who died here? Do you know where in the room he was when it happened?”

I’m aware this probably occurred on some patch of floor and that the patch looks completely ordinary and feels completely ordinary, as do the textured beige tiles that will belong forever to James. Still, I care about it very much. “Oh. I don’t know where that was,” our bartender told us in a friendly voice. Then we all kind of laughed, as you do. “I never want to know. I hate to think about it,” she said. 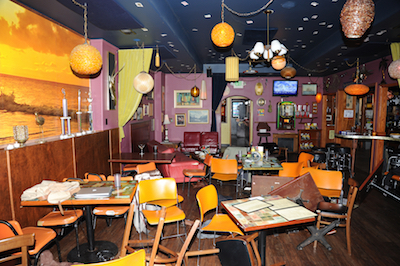