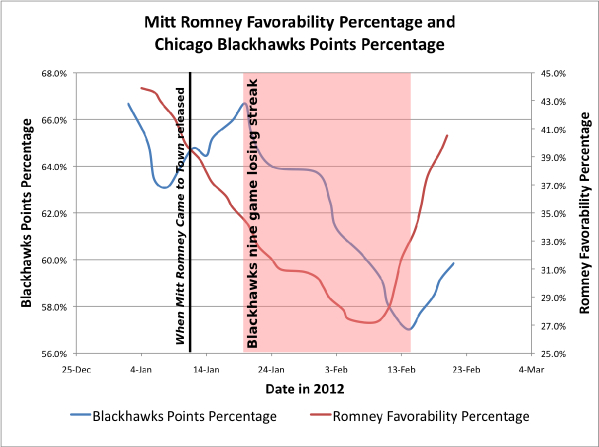 2012 has been a rough year for both Mitt Romney and the Chicago Blackhawks. Despite Romney’s consistent position as the default frontrunner, four other candidates have managed to push ahead of him in the polls. Consequently, Mitt’s favorability ratings have plunged as each new contender launched vicious attack ads aimed at besmirching his character and record.

If the damage caused by these types of attacks on a primary frontrunner was limited solely to that candidate’s favorability numbers, the conversation would end there with a shrug and a brief lament about how nasty politics have gotten. However, as the chart above definitively demonstrates, Romney’s declining favorables have ultimately led to a concomitant decline in the Chicago Blackhawks’ points percentage. In fact, shortly after the pro-Gingrich SuperPAC “Winning Our Future” released the hit-piece documentary, When Mitt Romney Came to Town, the Blackhawks suffered a nine game losing streak that has left the club in danger of missing the playoffs entirely.

This is not to say that Republicans are alone in producing mean-spirited campaigns that damage venerable hockey teams. Indeed, 2008’s bitter Democratic primary between Barack Obama and Hillary Clinton produced a similar effect: Clinton had previously been the clear frontrunner, but the nastiness of the primary campaign slowly ate away at her favorability numbers. More specifically, the percentage of people who viewed Hillary favorably fell from 52% in November 2007 to 48% by the end of January 2008. And the Blackhawks? Well, it was during this disastrous December/January stretch when Chicago went only 9–15–2, effectively ending their playoff hopes.

Oh, sure, the Blackhawks players must assume some responsibility for their current difficulties: the team clearly lost its way defensively, giving up thirty-eight goals during their nine game skid. And, yes, the month-long power-play drought didn’t help either. But while team captain Jonathon Toews and Patrick Kane have admittedly struggled, Newt Gingrich, Rick Santorum, and even Ron Paul have done them no favors as their attack ads have torpedoed Romney’s 2012 favorability ratings from a high of 43.9% to a low of 27.2%. Over this same time period, the Chicago Blackhawks watched their points percentage drop from a high of 65.0% to 57.0%. So, yes, Toews and Kane should take some heat for the losing streak, but so too should Gingrich and Santorum.

Having established that the collateral damage of these primaries is wholly unacceptable in a modern democracy, the obvious question is, why do we put up with it? What do we get out of squeezing barbed, often misleading talking points from candidates who might otherwise be reasonable human beings?

Well, I can tell you what we don’t get: home ice advantage in the NHL playoffs.

The fact is that this country and this Blackhawks team are in a precarious position. Yes, we’ve seen a few highs like 2008’s ephemeral post-election hopefulness (remember Obama’s 69% favorables?) and 2010’s glorious Stanley Cup victory, but we’ve also seen morale-depleting lows such as the debt ceiling debacle and an early exit from last year’s NHL playoff.

Fortunately, Mitt Romney’s favorability numbers have recently undergone a surge that has propelled the Blackhawks out of their nine game funk and even induced a four game winning streak. Will it be enough to keep the Blackhawks in contention for a playoff spot? That depends on how much longer Gingrich and Santorum plan to stay in the primary race. If they bow out soon, the NHL playoffs may have time to correct itself with the Hawks moving up to a higher seed. But what happens if Gingrich and Santorum decide to stay in the race indefinitely, forcing a brokered convention?

The honest answer is: nobody knows. Let’s just hope that doesn’t happen.