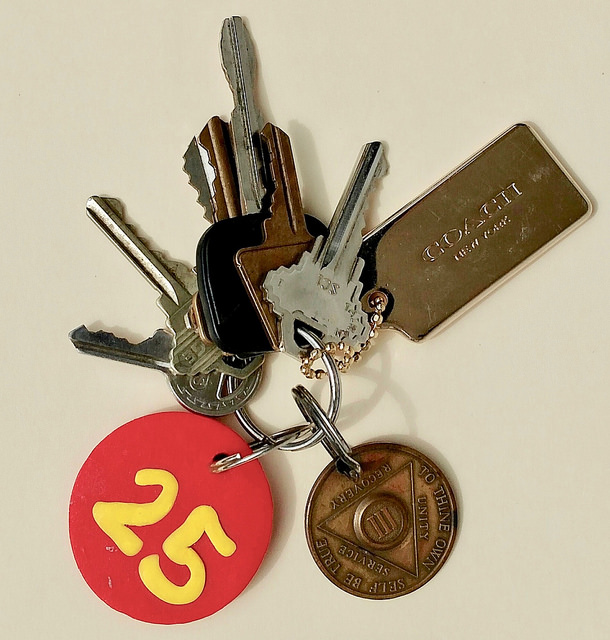 My father is a recovering alcoholic, sober for nearly 30 years. Every autumn he returns to his rehab facility to attend an annual reunion event, where he receives a token to mark the latest anniversary of his sobriety. He’s always given these tokens to me, and I now have a large collection of them.

I keep most of these tokens in my treasure chest, but I have two on my key ring. One is the metal chip with a triangle and a Roman numeral III, which he received to mark his third year of being sober. There’s no particular significance to this one compared to all the other years. It just happens to be the one in which I had a hole drilled.

The other one is a DIY chip representing his 25th year of being sober. Dad wasn’t able to attend the reunion event that year — his travel plans were scuttled by Hurricane Sandy. I knew he was disappointed not to receive his special 25th-anniversary token, so I used modeling clay to create a DIY stand-in for him.

I was afraid the clay chip might burn in the oven or otherwise fail, so I made a second one as a backup and gave the better of the two to Dad. As usual, he immediately tried to give it to me for my collection. When I explained that I had created another one and would simply add that one to my pile, he insisted that we trade, to represent his annual ritual of giving his token to me. The one he gave to me — after I gave it to him — has been on my key ring ever since.