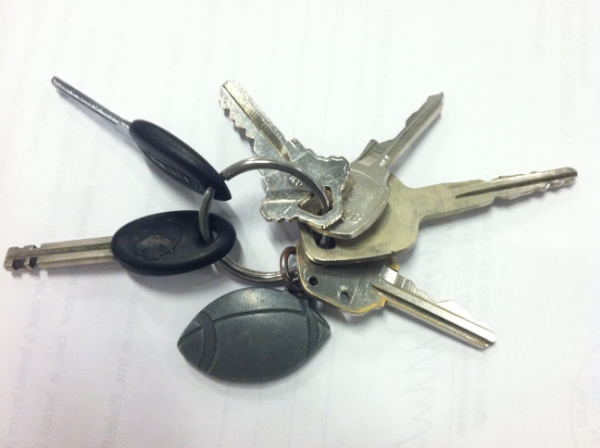 I’m an idiot. That’s what I think whenever I see the metal football on my key ring.

It was originally my spare key ring. I acquired it in 2010 from an old roommate when I moved into a run-down dive in college. It was the spare key to that house, so I kept using that ring, which already had the football on it, for the spare keys to every place I lived after that.

About four years later, I was working nights in Spokane, Washington. On a particularly snowy afternoon, I had to get the six inches of fresh powder off the windshield of my ’85 Camaro so I could get to work. I scraped it clear and hit the road.

When I got to the office, I noticed my pockets were empty — no house keys. I retraced my steps from the office to the car but couldn’t find them. I realized I must have put them on the roof of the car when I stopped to clear the snow off of the windshield.

I fretted all shift and then drove home, hoping I would find my keys there. No luck.

I called a friend who lived nearby. No answer.

I knocked on the building manager’s window. He stumbled outside, blackout drunk. No spare key.

But he did let me borrow a ladder, which I used to climb up to an ice-covered low roof. From there I scrambled to the fire escape ladder, climbed three rungs, slid open my unlocked bathroom window, and crawled in feet-first.

Then I retrieved my spare keys, goofy football and all, and unlocked the door. As penance, I’ve used this as my primary key ring ever since, and am reminded of my stupid moment every time I fumble over the football.

Get ready for Illustoria #16: Music with our newest official T-shirt!