The Long Island iced tea and I have some history, though much of it remains, to me, a mystery.

At the Rock It Grill, a karaoke dive bar in my hometown that’s famous for its kitschy commercials, I used to slam Long Islands before belting out “Kiss From a Rose” or “All Star” or “You’ve Lost That Loving Feeling.” What I lost shortly after was that remembering feeling, that brain-functioning feeling.

Those days are long behind me, thank god, but data-mining must reach back farther than any of us realize—while doomscrolling on Twitter, I saw an ad for the Legendary Long Island, a Buffalo Wild Wings exclusive. I was alarmed, not only by my past catching up with me, but because this new strain of Long Island was made with MTN DEW, née Mountain Dew (another old flame! What’s next, Gushers filled with Everclear?). Unlike a traditional Long Island, which is caramel in color, this one was a deep and unsettling shade of greenish-black, like a glass full of seawater that an octopus had inked into.

Needless to say, I was intrigued. So on a hot Tuesday night, I walked into a B-Dubs for the first time since Obama’s first term, passing under a bright yellow logo that seemed to advise caution. Taking in the Mets and Islanders jerseys pinned to the pale gray wall, I wondered whether I would soon join the ranks of these athletic icons. Would this chicken wing chain, where “EVERY DAY IS GAMEDAY,” hang my Books Are Magic T-shirt in its bleak equivalent of rafters?

I grabbed a stool across from my friend Tom and eventually we were greeted by a young server with aspirations of facial hair, and his somehow-even-younger trainee, whom the server referred to as his “lovely assistant”—a problematic but apt title, as the two would repeatedly disappear when we needed them most, as if by magic.

Tom wisely ordered a Bulleit rye old-fashioned, the simplicity and elegance of which would mock me for the next hour. I gathered myself, took a deep breath, and ordered the Legendary Long Island. Our server stopped writing and looked up at me as if I’d asked him to punch me in the kidney.

“Yes,” I half-lied. (I did a lot of Dew as a kid but rarely drink soda anymore, having at some point come across the nutritional information.)

“Okay, but have you had Mountain Dew Legend?”

“Okay. I’m gonna bring you a little taste then. Because I don’t like it at all, and there’s a lot of it in the drink, because it’s like a promotional thing.”

Our server returned with a full pint glass of something iced and bluish black, far less green than it appeared in the ads, which was a bummer. It didn’t look as otherworldly. 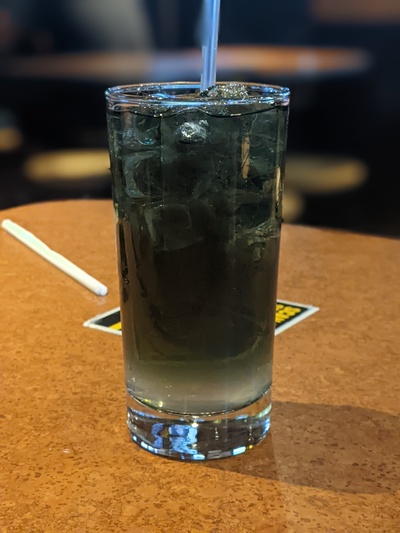 “Is this the Long Island or just the Mountain Dew?” I said, remembering the phrase “a little taste.”

Our server, his trainee, and Tom all watched as I stuck a straw in the glass and took a small sip. It tasted vaguely berry-ish but so saturated with sugar that it’d be impossible to pinpoint which berry if not for the unmistakable color. (It’s supposed to be blackberry citrus-flavored.) Of the myriad Dews I’d done, I’d rank it ahead of only Sweet Lightning, which tastes like a peach farmer farted into a box of Honeycombs.

“Not bad,” I fully lied, hoping he wouldn’t charge me for the Mountain Dew Legend.

Though the server’s eyes pleaded otherwise, I confirmed my order of the LLI. I thought he’d make me sign some sort of waiver, but he just checked my ID, probably because he was so young that all adults looked the same to him, with no discernible difference between thirty-year-olds and sixty-year-olds.

Quite some time later, he returned with our drinks. Most of the Long Island was the same menacing shade as the Mountain Dew Legend, but the bottom was murkily clear, a sad amalgam of well vodka and well gin. Unlike the ad I’d seen on Twitter, which was now running hugely on the wall to my left, there was no lemon garnish. For the first time, I considered the prospect that this wasn’t a real cocktail.

I took a sip and tasted only triple sec, which I didn’t expect or love. (Had he poured the vodka and gin first, then soda, then topped it off with triple sec? Why?) I stirred the drink until it was all the same unholy blue hue, and took another sip. Now I couldn’t taste any liquor, only Dew.

“It’s not as bad as I expected,” I said to Tom. What I meant was that it wasn’t as awesomely bad as I’d hoped. It just tasted like a stupid, inferior flavor of Mountain Dew, with none of the freakish potency or miraculous drinkability of the OG LI. Is a Long Island robbed of rum and tequila, and drowning in twelve ounces of cash-grab soda, a Long Island at all? I submit that it is not.

I thought that I would get drunk and the ice would melt, blunting the atrocious sweetness. But after forty-five minutes I was still sober, while a flotilla of ice chunks floated defiantly in my glass, physics be damned. (Another magic trick by the demented B-Dubs waitstaff?) Even I—a stubborn dope who insists on finishing bad books and bad meals and, yes, bad drinks—decided to cut my losses.

The Legendary Long Island had committed the cardinal sin of Long Islands: It was weak. Worse than that, the caffeine in this abomination was actually perking me up, which I found outrageous.

When I told our server he could take my half-full glass away, he looked both disappointed and victorious, as if he’d just won a game of chess against a child. “I tried to warn you,” he said, adding that he and his trainee had debated whether I would finish it.

The thought of them observing me poke at a gimmick cocktail in this QR-coded chicken chain, while giant Legendary Long Island commercials were projected onto the walls, was blandly dystopian. I felt like I was in a George Saunders story, one without a ton of payoff (see: his more recent stuff).

The server asked what I’d have next, then tried to upsell me on some top-shelf scotch, as if we weren’t at the mall. I ordered a big old beer and a cheap whiskey, hoping that, in traditional Long Island fashion, my memory of the night wouldn’t stick around in the morning.